Gr 11s prank across the board 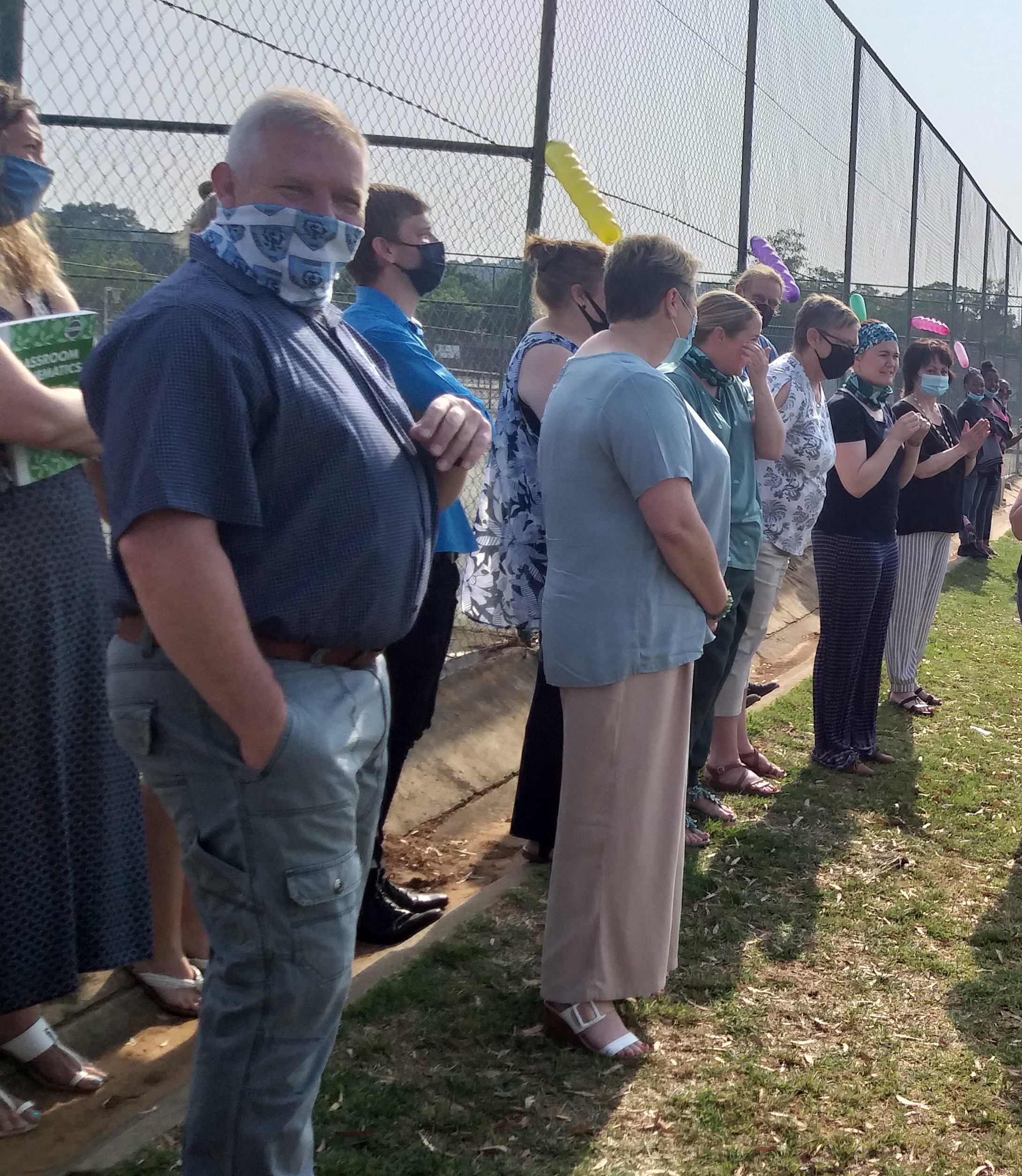 DURING PRANK WEEK the Grade 11 learners are set loose to cause havoc and disruption in their teachers’ lives. The week started off with a bang as they played a pre-recorded message inspired by the horror film The Purge over the intercom, stating that Prank Week had begun and that the teachers should keep one eye open and tread carefully.

After the announcement, some of the grade 11s put masks on and terrorised several grades, after which the S1 class ran and hid while the S2s attempted to find and catch them. In the following period quite a number of pranks ensued: in Music, the learners swapped instruments and held a concert for Dr Cromhout, in Geography, the learners acted like the teacher and ‘taught’ their new learner and in Accounting, every activity was controlled by a remote control!

The next day was labelled ‘Sloth Day’. The learners wore items of sleepwear such as a gown or slippers and slowed down their movements. In the first period, Gabriella Marais entered the Geography class yelling that an earthquake had struck. It was hilarious to see the girls shaking the desks and falling about as they pretended to be caught up in the earthquake. The fun didn’t stop there as Gabby returned twenty minutes later, this time pretending that gale-force winds had struck the classroom.

Later that day, in Maths, hilariously bad jokes were told, accompanied by even worse sound effects and the learners made sure to keep their shenanigans at a slow pace. There was even a dramatic fall performed by Boipelo Mateza, after which it took her almost five minutes to get up! Of course, that was not the final prank for the day. The previous evening, the Grade 11s had made sure to tell the FET teachers to bring a pillow to school for an epic pillow fight during English and also threatened that there would be severe punishment for those who did not comply. Mrs Noeline Stumpfe and Mrs Natasha Slabbert had great fun releasing all the stress from the year by attacking the Gr11s with their pillows. Unfortunately for the teachers who ignored the warning, they got sprayed from head to toe in Crazy String.

The highlight of the week was on Wednesday, when the epic, rapid-fire water balloon fight took place during break in the matric garden. Armed with black bags as protective gear, the teachers ruthlessly destroyed the Gr11s and Mrs Slabbert even stole their ammunition. Many learners said that once they were defenseless, they feared for their lives and the entire grade was forced to retreat back into the quad.

The fun did not end there though, as the teachers who thought they could avoid getting wet from the balloons ended up being bombarded with buckets of water, and even Mr Van Wyk was sopping wet by the time the bell rang. The water theme continued for the rest of the day with the Gr11s, donning goggles, hats and costumes, enjoying a pool party in the quad. They made-believe that the grass was a refreshing pool!

Before the water-balloon fight, Mr Van Coller, aka Agent Horace, was given a special assignment by a mysterious stranger in sunglasses and a black coat. According to the letter he received, he was to save the hostages a notorious criminal, Dr Decimal, had taken. Lead by clues left by the villain, he ended up in the Harcourt Vernon Hall where the epic final battle was held which consisted of rapid-fire questions. The odds seemed to be in Dr Decimal’s favour as she received super easy questions to answer, whereas Dr Horace had to struggle with more complex questions. Dr Horace eventually defeated Dr Decimal through the final question which consisted of a sum with a decimal – which was ironically Dr Decimals’ only weakness. Much to the relief of the hostages, they were freed and the notorious villain was taken to prison by a Special Agent.
That wasn’t even the end of the pranks for that day, as Mrs Schoeman took the opportunity to viciously attack the Gr11s during their Life Science period at the end of the day. The learners started class thinking that it would be an everyday lesson, and so they were quite surprised when Mr Els from Grey College entered the Jubilee Hall where they were sitting, and announced that he was there to check up on the standard of Mrs Schoeman’s teaching as well as how well the learners knew their work. The Gr11 Life Science girls watched in horror as a few of them were called out to perform an oral test completely unprepared. Mrs Schoeman, who was ever so believable, made sure to collect some files as well as summary and activity books to make it seem extra real. Once Mr Els returned with the other learners, he hammered on the fact that the learners did not know enough to have started with Gr 12 work already, and that Mrs Schoeman would be reported for her ineffective teaching.

As he insulted Ma’am, hands shot up to defend her. Jasca de Abreu, who angrily fought back and protested that Mr Els was blowing everything out of proportion, was one of them. At the end, Mr Els subtly revealed that it had been a prank all along when he departed stating that Mrs Schoeman should look for another post somewhere in Port Elizabeth, which referred to a prank played on last year’s Gr11s.

It is safe to say that none of the Gr11s ever expected such a traumatising prank to be played on them barely two hours after they had pelted the same teacher with water balloons. After the prank had been revealed, Mrs Schoeman said that her heart had been warmed by the fact that so many of her learners were ready to defend and fight for her.

Thursday had an entirely different theme as the learners pitched up at school wearing uniforms from other schools such as Saints, Grey, Brebner, Eunice, and even Oranje. After the initial chaos of the morning where close to 1000s photos of these ‘foreign students’ were taken, the day proved to be quite calm, the only other prank being the Physics, Tourism, and History girls all swapping classes.

The entertaining finale, held on Friday at the Astro, was a ‘Car Bonanza’, with the grand prize none other that Mr Van Wyk’s car. A lucky draw took place and each teacher received a small gift as their names were called.

The highlight of the event was Mr Van Wyk not receiving his own car when his name was called, but instead a Gr 11 learner, Hlompo was announced the winner. Luckily for Mr Van Wyk, the final lucky draw had to be redone as, according to the announcers, the learner did not have a driver’s licence yet.

Both the staff members as well as the Gr11 learners left the Astro in joyful spirits, grateful that all of the pranks had been a huge success and that everyone had had fun. One of the learners had hired a jumping castle-slide and several learners enjoyed playing in the soapy water as the week finally drew to an end.

Do not miss an enchanting evening

How did the June riots affect you?